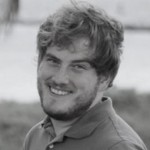 The literature on European environmental policy has rapidly expanded over the last ten years. Between 2010 and 2015, there were over seven hundred articles about the European Union and environmental policy, compared to only two hundred and fifty articles between 2000 and 2005.[1] Ironically, given its focus, much of this literature is written outside of the major European studies journals.[2]  However, it is important to study the topics and approaches that environmental policy scholars use when publishing in European studies journals because of the key role these journals play in the field.[3] Therefore, in this post I explore environmental policy articles in two of these journals: the Journal of European Public Policy (JEPP) and the Journal of Common Market Studies (JCMS).[4] JEPP and JCMS were chosen because they “play an integrating function by holding the various subfields of EU studies together”.[5]

To keep the analysis manageable, I examined environmental policy articles in JEPP and JCMS that were published between January 2010 and October 2015. I searched article titles and keywords for environmental topics, which led to a total of thirty-six articles in both journals (eleven in JCMS and twenty five in JEPP). This amounts to approximately 4% of the articles published in these two journals during this time.[6] I then categorized the articles along two dimensions: the environmental issue studied (“climate change” or “other environmental issues”[7]) and whether the article dealt with internal EU/European policy or the EU’s external policy in international negotiations.

The results of this analysis are shown below (the full list of articles is available here). Eleven articles focus on EU/European internal climate change policy (including the EU Emissions Trading System and the Biofuels Directive). Nine focus on the EU’s role in international climate negotiations, six on external EU environmental policy more generally , and ten on internal non-climate policy. 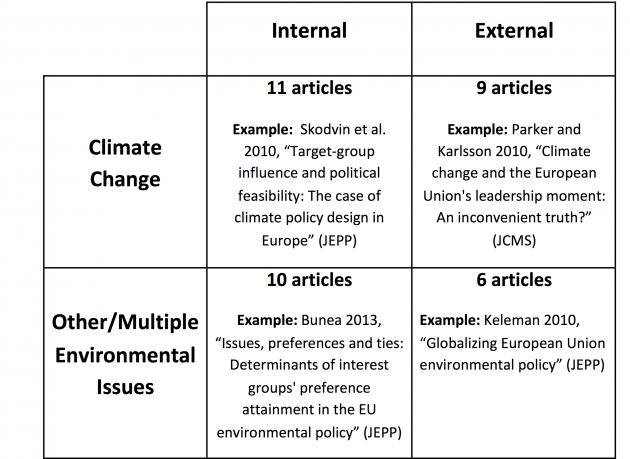 Environmental policy articles in JEPP and JCMS (2010-2015), categorized according to environmental issue and internal/external focus

What this matrix does not show is the relationship between these thirty-six articles. Here I focus on one aspect: the references that the articles cite in common. The articles being studied here cited a total of 1,702 references. Of these, 127 (~7%) were cited by more than one article.[8] I used this data to analyze when two articles cited the same source, and created a network visualization from the results. 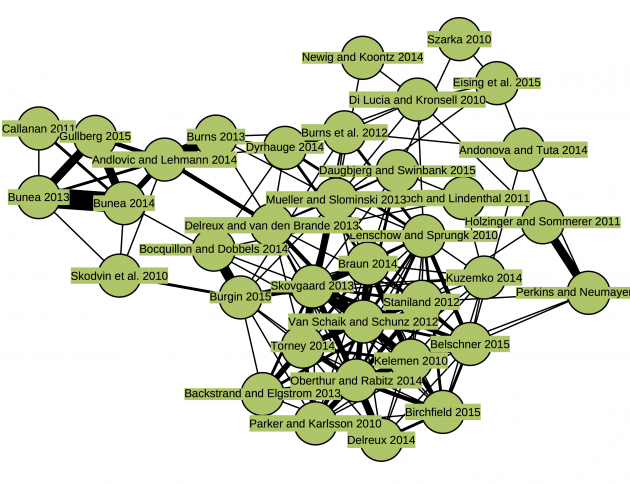 I followed this with a “network density” analysis, which looks at the percentage of articles that are connected to each other. The highest possible network density is 100%, if every article shared at least one reference with every other article. A network density of 0%, on the other hand, would mean that none of the articles shared any references in common.

The overall density of the thirty-six article network is 25%. When the analysis focuses only on climate change articles, the density is slightly higher (28%), while environmental and internal policy articles are lower than average (19% and 23% respectively). The real outlier is the external policy category, which has a much higher density, at 51% (see figure below). 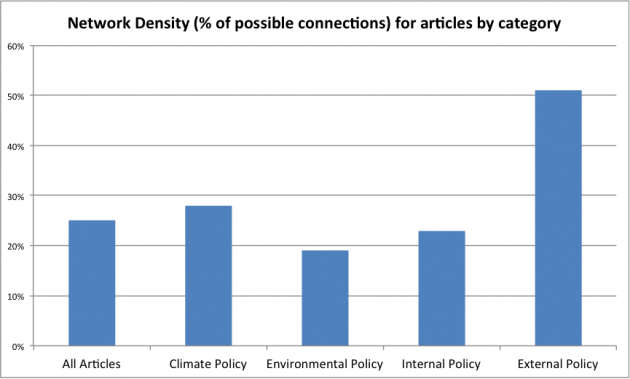 JEPP/JCMS article categories, percentage of articles in each category which share at least one reference

The higher density of the external policy articles can also be shown by visualizing the network again and color coding the articles according to the internal/external dimension: 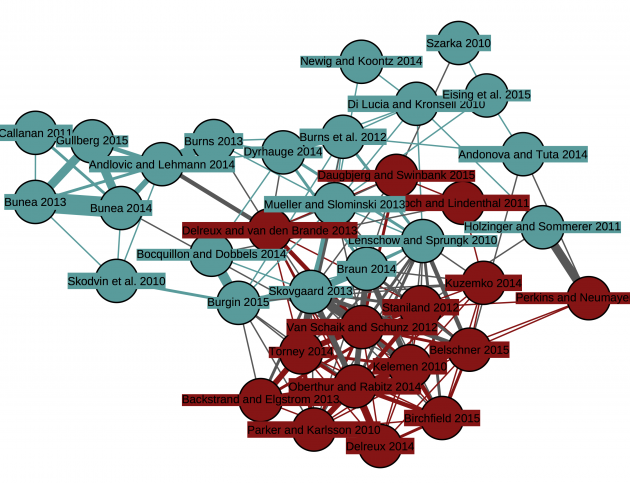 What explains the difference? One important factor seems to be that there are more central, influential references in the external policy category. For example, the internal EU policy category has eighteen sources tied for top citations, all with three articles citing each. In contrast, scholars working on external policy are more likely to cite the same articles. Especially influential is Ian Manners’ 2002 article on the EU’s international position as a “normative power” in international negotiations.[9]

The articles I have analyzed make up a small percentage of those on European environmental policy, and an equally small percentage of the articles published in JEPP and JCMS. Therefore it isn’t clear whether the patterns identified here are representative of the entire literature on European environmental policy, or are only a feature of JEPP and JCMS articles.

Regardless, a few key points should be highlighted. This group of articles has a strong focus on climate change and the EU’s role as a negotiator in international institutions. What drives the focus on these topics? It could be a product of scholars’ interest, or alternatively due to choices made by the journals’ editors to accept certain types of research.

The network analysis suggests that the scholars publishing articles on the EU external environmental policy are more likely to cite from similar sources than scholars working on EU internal policy. There are a number of possibilities to explain this. One is that as a more recent field of inquiry, external policy-focused scholars are more likely to cite more references in common.

Finally, focusing on the big picture, this analysis has made me realize the sheer extent and variety of the literature on European environmental policy. As the field grows, this suggests that scholars working on these issues could reflect once again on this diversity and work to find connections between their work.

[7] “Other environmental issues” included articles that focused on a non-climate topic (such as fisheries management) as well as those that looked at a broad range of issues (including climate change).

[8] This figure is an estimate based on the references available on Scopus. It should be considered an underestimate, due to the fact that some types of documents (e.g., European Commission communications) are relatively likely to be counted as distinct sources by the database.