Pawel is a researcher at the School of Geography and Planning at Cardiff University. His research interests include emissions trading, EU climate policy, NGO – state interface, and EU-US climate policy.

Nicole M. Schmidt obtained her B.A. and M.A. degree in Political Science from Heidelberg University whilst spending time across academic institutions, i.e. the University of Georgia, USA and Sciences Po Paris. She is a PhD candidate at Heidelberg University, where she focuses on climate change policy, particularly adaptation.

The Paris Agreement opens a whole new chapter in the history of climate change governance, which will also require a paradigm shift in research. What are the main challenges in bringing about this shift?

A remarkable feature of the 2015 Paris Agreement is that it allows countries to draw on a vast array of governance options to reduce their greenhouse gas emissions and adapt to climate change. And yet, knowledge about these governance options remains scarce. Even more complex is the issue of how to address climate change more effectively. How can well performing policies be diffused more rapidly and effectively? How can their effectiveness in reaching different types of climate-related goals be better assessed? Will citizens accept future costs and/or change their behaviour? Providing answers to these questions challenges researchers to clearly identify and devise potential remedies.

Fifteen early career researchers based at several European universities met in February 2016 to discuss these very issues. The two-day workshop “Understanding data frontiers in climate governance research” was hosted by the Department of Political Science of the University of Zurich. While aspiring to respond to the questions posed earlier goes beyond our scope, in this post, we want to draw on the discussions around them that took place during the workshop. 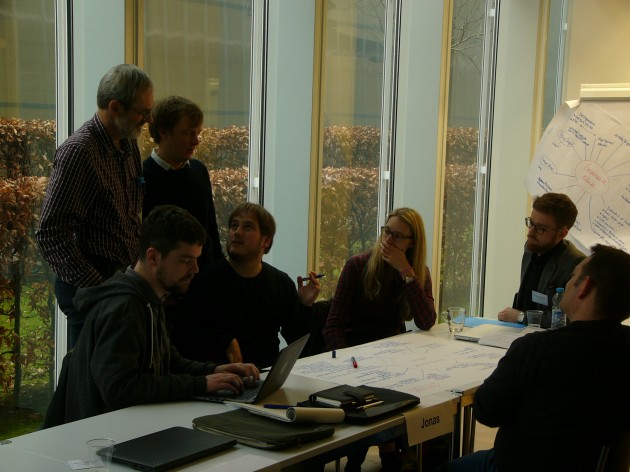 The Paris Agreement represents a paradigm shift for climate policy and challenges regarding its implementation and evaluation have been mentioned elsewhere already. Little attention has however been paid to the data-related obstacles to governing climate change after Paris. This is what we focused on during the workshop and would like to briefly outline here.

Firstly, it is clear that no one policy can address the complex task of mitigating climate change alone. This means that we need to consider policy mixes – the interactions between all policies – and also other governance arrangements, including private ones – that may impact climate-related goals in a specific jurisdiction, even if these policies are not specifically meant to address climate change. But, what are relevant policies and how do we assess them? How can their effects be assessed and weighted against each other? Crucially, what data and information do we need to successfully identify and evaluate these policy mixes? From this, it becomes evident that there is an overwhelming need to employ existing – and built new – indices and databases in innovative ways building on bottom-up contributions coming from state and non-state actors. One needs to keep in mind too that for the first time in history Nationally Determined Contributions (NDCs) have been prepared by 189 countries (latest being Guyana’s submission on 20th May 2016), so that information will be needed for a much larger set of countries than ever before.

With regards to climate change adaptation, the picture is especially unclear. A topic that has been heatedly debated since the early 2000, many scientific discussions still focus on establishing what adaptation measures really comprise. In a research field where many different ideas and concepts exist but data is scarce and often contested, efforts to track adaptation in a systematic manner are not only welcomed but greatly needed. The fact that nation states are now formally yet not bindingly requested by the UNFCCC to report their strategies and measures for adaptation, is a useful tool for comparative climate change research. However, particularly for the case of adaptation this comes with a range of challenges. Adaptation policies have implications for an array of different sectors and often, policy choices are constrained by decisions taken at the national level while benefits of adaptation measures are predominantly expected at the local level.

Finally, the change of paradigm requires a better understanding of drivers of policy change, because states will be expected to improve their climate-related policies and commitments in five-year cycles. They will thus need to know how to best encourage those policies that work better. This aspect is probably the most political of the ones featured. However, so far we do not have sufficient systematic information about, for example, the positions that political parties have on issues closely related to climate change mitigation or adaptation. Some recent experimental research has provided insights into citizens’ needs and motivations regarding climate policy.

Beyond the traditional role of states in climate governance, the Paris Agreement highlights the role of non-state actors and how they can cooperate with states in a way that catalyses efforts to strengthen mitigation and adaptation action. Also in this area there is substantial room for improvement. Given the myriad of non-state initiatives that seem to emerge, and how they are strongly interlinked, having comprehensive and accurate information regarding their goals, scope, membership and actual implementation is extremely challenging. Many datasets are emerging that seek to address this goal. However, the available information particularly on effects and effectiveness remains very limited.

The workshop proposal has been jointly written by the Early Career Investigators Network of the COST-funded action INOGOV. The participants owe special thanks to Paula Castro and Jonas Schoenefeld, who dedicated a lot of time and effort to organize this event. The workshop would not have happened without the financial support of the Swiss National Science Foundation.

The authors wanted to thank Paula Castro, Sebastian Sewerin and Jonas Schoenefeld for their comments on earlier drafts of this article.