Every five years the European Union changes the composition of its Commission. While this year’s discussions have mostly focused on who will be appointed to the Commission, two other issues, repeatedly pushed for by the Netherlands and France, loom large on the political agenda: the Commission’s political programme, and the need to  restructure the Commission [1]. In this blog post I focus on the second issue, in particular on proposals for a clustered Commission – a reorganisation of the College of Commissioners around a handful of policy clusters – and how such a change may affect the future of EU environmental and climate change policies. Will the proposed cluster structure help achieve the elusive EU goal of environmental and climate policy integration (EPI) within all other EU policies? I argue here that although certain cluster designs could prove helpful, small clusters focusing on environmental issues risk perpetuating policy-making silos and hindering EPI. Whether large clusters indeed deliver increased EPI will depend on the personality and politics of the Commission Vice-Presidents appointed to oversee them.

The return of an old idea: Clusters of Commissioners

It thus appears that the 28 Commissioners are here to stay, and the number could keep growing with each enlargement. But this situation is far from optimal: the sheer number of Commissioners undermines collegiality, fosters a culture of policy-making in silos, slows down decision-making (still based on consensus, which is harder to reach at 28) and blurs the identity of the Commission. Indeed, if Commissioners are supposed to represent the common European interest, why do we need 28?

A clustered architecture could resolve some of these issues, bringing together a number of Commissioners (and their respective DGs) under the authority of a Commission Vice-President whose job it would be to foster coherence and synergies between the policy areas.  Clusters also address another pressing issue at EU level: the ever-present impression that the EU is constantly expanding its competences, and its interventions within areas of shared competence. A limited number of clusters oriented around a limited number of policy goals could be a way to meet President Barroso’s objective for the EU to be “be big on the big things and small on the small things”.

Barroso rejected the idea of clustering in 2004 – but times have changed, with the number of Commissioners apparently set in stone, and a political imperative to better focus on the Commission’s actions.  As such, it is important to study what impacts such clusters could have on EU environmental policy, and especially EPI.

Changes to the structure of the European Commission can affect the content of the policies it produces. Thus while the creation of a new DG for Climate Action in 2009 may have favoured EU climate change policies, the rest of EU environmental policy appears to have suffered, with cuts in personnel in DG Environment and a number of environmental issues kept from the agenda.

As outlined above, the current structure of the European Commission leads to distinct silos of decision-making. While EU Treaties state that environmental policy integration concerns all EU policies, EPI has not successfully overridden policy silos, for example in integrating climate objectives in EU energy policy. In many cases, environmental “integration” has been judged to amount to “greenwashing”, as seen in the recent 2013 CAP reform.

Clusters, and the way they would be structured could change the way the Commission works, creating stronger links (and a need for coherence) between the issues grouped within the same cluster; they could thus play a key role in finally delivering EPI.

In the following table, I compare four recent proposals from prominent groups, chosen because of their detailed architecture of what a clustered Commission could look like: 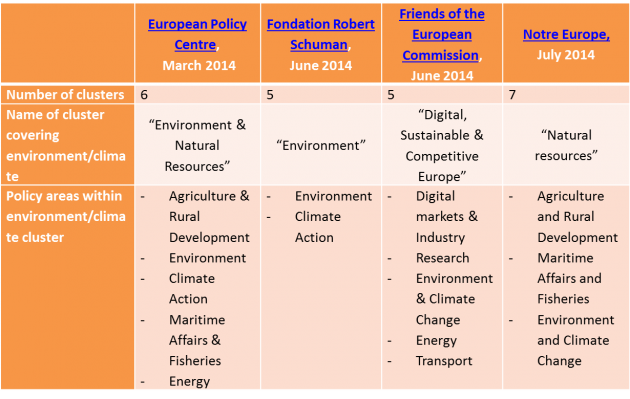 These different proposals can be compared based on the number of clusters proposed (from 5 to 7), the breadth of the cluster comprising environmental issues (from 2 DGs to 5), and the way environmental DGs are listed – as two separate DGs or as a reintegrated Environment-Climate Change DG.  The proposal by the Fondation Robert Schuman stands out as the only cluster proposal in which environment and climate change constitute one of five clusters on their own. While this may indicate that environmental issues are as “worthy” of a cluster as social or justice issues, such a narrow cluster would not challenge silos in decision-making and would not lead to greater EPI. The other three proposals each list environment and climate change alongside 2-4 other DGs: but which grouping would deliver the best results in terms of EPI?

Although all EU policies have a duty to achieve EPI, arguably this duty is greater for policy areas where (1) a high amount of negative environmental impacts are generated (agriculture, energy, transport, industry), and (2) the EU level of policy making is prominent  (agriculture, fisheries, etc.).  Thus while transport has major environmental impacts, most transport policies are decided in Member States – EPI is thus primarily a problem of national, not European policies. This is not the case for agriculture or fisheries, where most rules are agreed on at EU level. Based on these two criteria the proposals by Notre Europe and the European Policy Centre are interesting as they create a cluster bringing together agriculture, fisheries, environment and climate change (with the EPC’s proposed cluster also incorporating energy). But the degree of EPI resulting from such clusters would be highly dependent on the politics of the Vice-President in charge: would he or she be willing to trump sectorial interests in order to achieve environmental and climate change objectives?

Finally, the proposal by the “Friends of the European Commission”, regrouping a number of EU civil servants and representatives from the private sector is the most innovative. Instead of putting ENV and CLIMA with agriculture and fisheries (which together with Regional Policy form a cluster of “territorial cohesion”) they create a cluster around Industry, Research, Digital Europe, Transport and Energy. This is a very interesting cluster as Industry, Transport and Energy have all been targeted in the recent years as areas in which the EU should do more – incorporating environmental issues in this cluster may lead to the mainstreaming of environmental objectives in new policies for these sectors.  Arguably, this could also have positive effects on EPI in other sectors: e.g., if DG Research ‘greens’ its agenda, or if the cluster’s Vice-President champions environmental issues at cluster level.

Whether a clustered Commission yields greater EPI is up for debate: depending on the architecture of the clusters, it could reinforce present silos (Fondation Robert Schuman), bring together environmental DGs and DGs overlooking areas with  the most environmental impacts (EPC, Notre Europe) or strive for new synergies between Digital Europe, Environment, R&D and others etc.  However, administrative organisation is only part of the story: EPI requires a champion, either a Commissioner or a Vice-President, willing to push for further environment and climate mainstreaming.  The next few months will tell us whether the Commission will finally have both the (re)organisation and the people it need to achieve EPI.

[1] It is important to note that out of the four clusters proposals compared in this post, two were produced by French  think tanks, indicating the importance given in France to these discussions compared to other Member States.