Dr. Jonas Schoenefeld is a Reserach Associate at the Institute of Political Science at the Technical University of Darmstadt/Germany and a Visiting Researcher at the Tyndall Centre for Climate Change Research at the University of East Anglia/UK. He focuses on enviornment, climate and energy politics.

With the referendum on UK EU membership fast approaching, both the Leave and Remain campaigns have put forward their views on the future of environmental policy in the UK and its relationship with the EU. This political debate raises a number of questions:  how green is the European Union; how effective or in some cases cumbersome are its regulations; will the UK be more pro-environment, or more influential outside the block. These questions have informed academic debate on EU environmental politics and policies since the early 1990s.

Twenty-four years ago a special issue in the Journal of Environmental Politics brought together for the first time research studying the ‘green dimension’ of the European integration process: from the rise of green parties in national political systems to the role of key European institutions in ‘greening’ policies (making them more environmentally-friendly) and to key concepts such as environmental policy integration. Interestingly, this first stock-taking exercise took place in the shadow of what was then felt to be a great threat for EU environmental policies: British demands for repeal and repatriation of environmental legislation in the wake of the Danish ‘no’ to the Maastricht Treaty in 1992.

Back then, environmental policies were at the heart of the British ‘hit list’ of policies to be repatriated. Now, environmental issues are struggling to be heard in the EU referendum debate. Over the past twenty-four years or so, researchers on EU environmental policy and politics have ploughed the furrows delineated in the 1992 special issue – investigating how green the European Parliament really is, how successful environmental policy integration has been, and the role of Green political parties and environmental groups across the EU – as well as developing new agendas for research. In the early 1990s, slow progress stimulated concerns over the implementation of EU environmental policy, while from the run-up to the Kyoto Protocol (in the mid-1990s) onward, the EU’s climate policies and its role as an environmental leader gained traction. Finally, the 2000s saw a surge in research on the effects of the EU on its member states, and the effect of the three waves of enlargement to Central and Eastern European Countries on the functioning of the EU and on its green credentials. 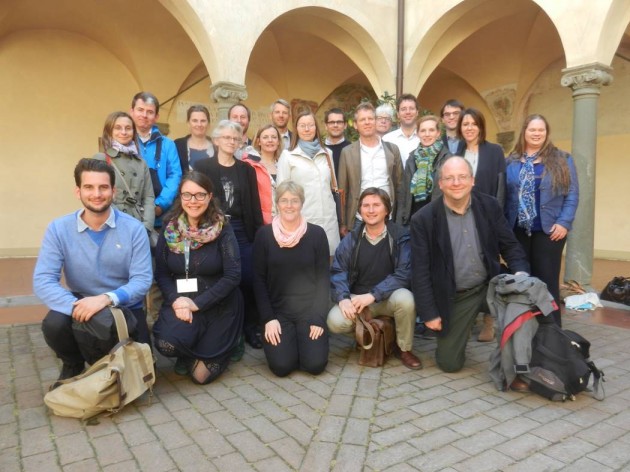 The ECPR ‘Whither the Environment in Europe?’ workshop participants

Where next for the environment in Europe?

We discussed three central issues. First, the changing role of central EU institutions in environmental policy, such as the European Commission and the European Court of Justice. The Commission has conventionally been depicted as an institution churning out new legislation at great speed. By contrast, the cutting-edge research shows that the European Commission is profoundly changing, both in its inner structure and in the activities it carries out. In two of its traditionally strong sectors of activity (policy-making and enforcement) the Commission appears to be stepping back by reducing the amount of new policy proposals, and indeed, in some cases, pursuing policy dismantling. It is also actively developing concepts for environmental governance and reinforcing retrospective (ex-post) evaluation of its policies. Concomitantly, the Commission appears to allow civil society to take a more active role in checking the application of EU law, effectively outsourcing parts of its enforcement duties to environmental groups.  This, in turn, links with the role of courts, where environmental groups have gained increasing legal standing, thus potentially shifting enforcement mechanisms in the EU. A recent example if this in the UK is the victory of the environmental law firm Client Earth against the Secretary of State for the Environment, Food and Rural Affairs in the UK Supreme Court on the UK implementation of EU clean air rules in 2015.

A second set of papers considered activities in parts of the EU that have so far received less attention, such as policy implementation in the new member states, as well as the role of the EU in regional environmental regimes in the Baltic. Developing a much deeper understanding of policy dynamics at the EU’s periphery is thus one of the areas that will likely draw future attention, and it also interlinks with the broader questions on EU leadership in environmental governance and the role of its newer members, who have at times been much more reluctant to endorse ambitious policy proposals, particularly on climate change. A focus on the latter appears to be driving current environmental policy research.

Third, a number of papers picked up a return of politics and the increasing contestation of the European Union project. Linked to ideas on policy dismantling, but also the current public debates on the future of the EU, there was a real sense among workshop participants that more integration and more ambitious environmental policy isn’t necessarily the only direction of travel within the EU. This necessitates an engagement with the broader ideas of European (dis)integration, the developments at its core, the borders of the European Union, and increasingly differentiated, or regional, forms of collaboration.

Curiously, the fact that academics have increasingly focused on the minutiae of European policy making and filling gaps in knowledge about governance processes stands somewhat at odds with the ongoing societal and political debates about the future of the European integration project more generally. It appears that these ultimately political questions are forcing their way back into a field that has increasingly focused on lower-level dynamics. Much like the EU itself, the future of environmental policy in it (and its study) remain in flux.